The term Saracen comes from Greek, derived from the Arabic word for Easterners. Romans first used the term Saracen to describe the nomadic Arab tribes of the Syro-Arabian Desert and the Saraceni name is very well known as a result of those conquering tribes who settled in various regions of Italy. The Saracens were considered one of the most culturally and socially advanced races during the 12th Century Crusades, excelling in all facets of art and responsible for some of the most significant mathematical discoveries in the world.

Saladin was a Sultan of Egypt and Syria and a great leader of the Saracens, who led the Islamic opposition to the Third Crusade in the 12th Century, eventually recapturing Palestine from Jerusalem. Despite his fierce struggle against the Crusades, Saladin achieved a great reputation in Europe as a chivalrous knight.

A very generous and virtuous man, Saladin’s generosity followed him to his grave, unable to pay for his own funeral for giving away most of his riches to charity.

The Saracen Knight – warrior and horseman – is used by Saracen Estates as its logo and wine branding. Saracen Estates follow in Saladin’s footsteps with numerous charitable donations.

Our Saracen Painting and the inspiration for our premium wine labels!

The Saracen Painting was a masterpiece from artist Sue Hurst The Artist during her studies at Edith Cowan University in 1999.

Sue speaks of the inspiration behind this intriguing design:
“After receiving the commission to explore a design for the Saracen Estate Wine Label, I did a little research and found that the word Saracen was used by the Ancient Romans, to refer to a people who inhabited the deserts near the Roman province of Syria and who were distinct from the Arabs. They were often referred to as desert dwellers.
This inspired me to paint the painting with the gold yellow and reds. The horse and rider came to mind as I was aware of their history for battle, fighting many battles on their magnificent horses with spear and sword in hand. The other symbols in the design are fictitious, but I felt a little artistic licensing wouldn’t go astray.
The painting was painted on a textured surface and the style was a little naïve, over all it seemed to work and at the time I was happy with the end result.”

Saracen Estates is immensely impressed with the end result too and sections of the painting form the centre piece on the labels of our Premium Saracen Estates range!

The ocean strongly defines the climate in Margaret River, which is classed as ‘west coast Mediterranean’ featuring warm to hot summers and mild to wet winters. The region is surrounded by the Southern and Indian Oceans on three sides, meaning humidity, frost and extreme temperatures are rare. The majority of Margaret River’s approximate 1100mm of rain falls between May and October, and the remaining six months of the year are relatively dry. Summer day time temperatures rarely move above 35 degrees Celsius and the influence of the ocean means nights are cool, providing perfect growing and ripening conditions for wine grapes. The dry summer and autumn and lack of humidity means diseases common to vines aren’t often a problem and come March the first white varieties are picked in the cool of night and early morning, with the last of the red varieties being picked in late April. 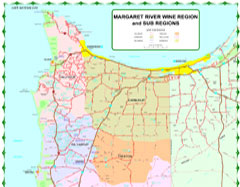 The original location of the Saracen Estates vineyard was in the famous Wilyabrup Valley which provided the excellent free draining laterite gravel loam known for producing the highest quality wines of the Margaret River Wine Region. The vineyard was planted with the classic varieties of Chardonnay, Cabernet, Semillon, Sauvignon Blanc and Shiraz. Utmost care and attention is still today given to ensure the best quality fruit is purchased at harvest to ensure maximum varietal expression and fruit flavour.

This philosophy is continued in the contract winery where each step of production is carefully monitored and no expense spared in order to produce the highest quality wine. Traditional methods are applied and the latest technology utilized. In our short history our success in the vineyard and winery is reflected in the quality of our wines and the accolades we have received around the country from some of the most highly respected individuals in the industry. Our aim is to produce wines that reflect and illustrate how the ideal climatic conditions, soil, viticultural and oenological practices can work together to create the highest quality wine. We hope you enjoy and love our wines as much as we do.